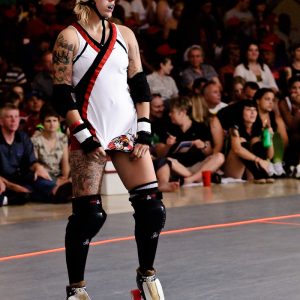 On Saturday June 18, I was (as usual) photographing the Atlanta Roller Girls. This season I have been using just my Nikon D300 with an on-board SB900 – changing shutter speeds and aperture to make the picture work best, and though the pictures this season have been “good”, they certainly haven’t been my best.

For this month’s bout I decided to go back to the way I shot things last season and use my Alien Bee monolights set up around the track. I had one light at one end/side of the track, and a second at the opposite end/side of the track – both triggered with my $25 Ebay triggers. This lighting style gives me an acceptable quality of light mostly even over the whole track – when everything works. On Saturday, for some reason, one of the triggers didn’t work all of the time. I’m thinking it is a battery issue, but…

So here is Holliegh Thomason, a.k.a Hollicidal, of the Atlanta Roller Girls team the Sake Tuyas. Holleigh is a beautiful girl, and she’s also an awesome athlete. She was standing on the track waiting for the whistle to blow. I framed the shot and snapped it. Boom… and only one of my two Alien Bee strobes fired. The one camera left didn’t fire. The triggers didn’t work. But this is the result of that “mess up”. Lit from one light pointed at a vaulted white ceiling more than 40 feet away from the subject.

Had the second light fired, the crowd behind her would have been lit, and the picture wouldn’t have been nearly as good. There are other shots from the day’s shooting that show how my roller derby two light set up really help capture the action, but from time to time equipment failures can provide you with the proverbial blind squirrel picture.