The Story Of Tula the Rescue Dog – Part 1 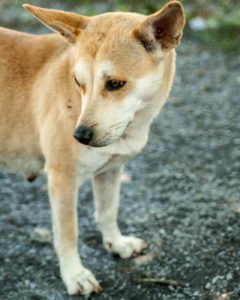 My first ever shelter dog photo session was a learning experience for me, but I was very happy to get better pictures of the shelter dogs than the cell phone snapshots they usually get. Better photos are directly related to faster adoptions, and I am more than willing to help these dogs find forever homes. However, I am aware that there will probably always be that “one dog” that captures my heart and makes me both sad and happy at the same time. My first such dog was Erica.

This is the only picture I have of Erica. I was told she had been rescued from a garbage pile. She was obviously skittish and frightened. Gentle touches were new to her. She was scared to death. Her tail was tucked tight underneath her body. She was shaking, and she refused to get close to anyone. I sat on a rock in the middle of the run with my camera in my lap while the other photographer, Darlene Kralik, tried to get a picture of her.

I managed to reach out and gently pet her side. She flinched – hard – but didn’t run. I kept petting her, eventually scratching behind her ear. But she didn’t budge from her stone hard stance.

I decided I needed to get up. I needed to move on to other dogs. She followed me to the gate to the astonishment of the shelter handler. I put my camera in the bag, came back into the run, and sat with her for another 15 minutes until she decided she was ready to go back inside.

I shared all of this story on my personal Facebook page, and many friends liked and commented on Erica’s story. Then 5 days later I wake up and learn that Erica is no longer on PetFinder and her info is missing from the shelter page. That could only mean she died or was adopted. Then my wonderful friend Susan shared a story she found on the Angels Among Us Rescue Facebook page.

Erica had been pulled from the shelter by the rescue group and was now named Tula!

Tula is pregnant, and the shelter had her scheduled for a spay. That meant that she would lose her puppies. This is not a cruelty by the shelter! Had those pups been born there, they likely would have succumbed to the numerous diseases and infections that abound in high-capacity shelters. But now Tula is in a foster home where she will give birth in a few weeks, and in two months there will be a few new pups and a now-spayed dog available for adoption.

I have reached out to Angels Among Us, and I hope to be able to photograph Tula through the rest of her journey until she is in her forever home. She is the first rescue dog to steal my heart like this (well, the second if you count Guinness), and I hope my helping to tell her story will get her and her pups to a Happily Ever After.